The Chair of Carmarthenshire County Council for 2019/2020 is Councillor Kevin Madge.

He was elected to the office of Chair at the Annual meeting of the Council held on 15th May 2019, and will serve until the next Annual Meeting which will be held in May 2020.

Councillor Madge has represented the Garnant Electoral Ward since 1995.

Married to Catrin for 35 years, they have two children - Bethan and Matthew, and three grandchildren - Ela, Jac and Lewis.

Kevin was born and raised in Glanaman and has worked in the Aman Valley throughout his adult life.

He has been a Cwmaman Town Councillor for forty years and he and Catrin have been Mayor & Mayoress on several occasions.

He also serves as Chairman of the Royal British Legion - Garnant Branch, Garnant Family Centre and Cwmaman Meals on Wheels, and is a member of the Amman Valley League of Friends.

He represents the County Council on the Brecon Beacons National Park Authority, and the Mynydd y Betws Wind Farm Community Fund, and is on the Governing Body of Ysgol y Bedol.

A keen football supporter, he as served as Chair and President of Cwmaman Football Club, and spent 25 years as a Welsh League and Neath & District football referee.

The Chair is the first citizen of Carmarthenshire County Council, and is elected at the Annual Meeting. The duties include chairing full meetings of the Council and representing the Council at formal and ceremonial occasions in the County and beyond. He / she also welcomes visitors to the County and attends and supports events organised by local people and organisations.

During his / her year of office the Chair of the County Council usually raises funds for local charities. Councillor Madge will continue this excellent tradition and will be supporting the Trussell Trust, which supports a nationwide network of food banks and emergency food provision for people in crisis, and will in particular be supporting the Ammanford, Carmarthen and Llanelli Food Banks. 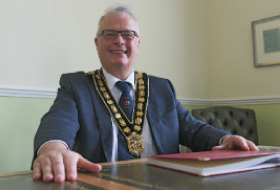