Bats may use any barn, other old building or roof space in Carmarthenshire, including new structures in urban areas. You may not have noticed the bats presence – they often roost in the tiny spaces, cracks and crevices in roof spaces or behind weatherboards, fascia and tiles. Some bat species have declined alarmingly. In addition to loss of habitats where they feed, loss or damage to roost sites is a major factor in their decline.

There are 17 species of bat in the UK of which at least 10 occur in Carmarthenshire. Each bat gives birth once a year, early in summer, the females tending to gather together in a communal roost to give birth and bring up their young. This is when they are most likely to be seen using buildings. By the end of the summer these roosts are generally vacated. In winter they hibernate and live off body fat stored during the autumn.

All British bats are protected under the Wildlife & Countryside Act 1981 (as amended) and have European protection under the Conservation of Habitats and Species Regulations 2010 (as amended), which implements the EC Habitats Directive in the UK. It is an offence to deliberately capture, injure or kill a European Protected Species or to deliberately damage or destroy the breeding site or resting place (roost) of such an animal or to obstruct its access. A roost is protected regardless of whether bats are present at the time. ‘Damage’ would include operations such as timber treatment in roost areas. It is also an offence to deliberately disturb a bat that may significantly affect its ability to survive or the local distribution or abundance of that species.

Bats and the planning system

The presence of a protected species is a material consideration when a local planning authority is considering a development proposal which, if carried out, would be likely to result in disturbance or harm to the species or its habitat. LPAs also have a duty to have regard for the European legislation so that any effects on bats must be considered as early as possible in the planning process.

Carrying out a bat survey

Where bat presence is possible it is advisable to investigate the presence of bats at the pre-planning application stage. Survey information is required to help inform the application process and identify what mitigation may be necessary. This should be carried out by a licensed bat worker. You should not carry out the survey yourself as you may overlook signs of bat occupation that a trained person would find.

Bats are commonly found in the following locations:

Bats may be found in other situations beyond those listed above. For example, pipistrelle bats will occupy modern buildings and built structures. The homeowner, developers, and those acting for them, should be mindful that disturbance of any roosts or harm to a bat or bats is a criminal offence.

If the proposal would affect bats then a licence to undertake the work may be required from Natural Resources Wales (NRW). The presence of bats rarely prevents development but adequate measures must be taken to ensure that are not adversely affected. If bats are found after the development has started, work must cease and NRW contacted immediately.

Find out about bat licences (NRW) 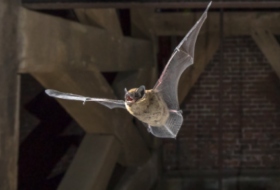 Find out more about bats in buildings, building maintenance, and advice for developers.

Carmarthenshire’s natural environment is rich and varied. Find out more about our key species and habitats, the Carmarthenshire Nature Partnership and much more!