Sky lanterns are novelty items made from paper covered wire or bamboo frames and an open flame heat source. Heat carries lanterns up into air where they can travel for miles from where they are first released.

However, they are considered to be a fire hazard with the potential to cause serious injury and/ or loss of life as well as damage to property. They can also harm wildlife, livestock and other animals by causing injuries that lead to suffering and a slow painful death.

Balloons and small balloon pieces are not only litter but are a serious threat to wildlife. They are often mistaken for food by whales, turtles and dolphins and once swallowed can block the gut slowly starving the animal to death. Wildlife surveys have also found birds that have become tangled up in balloon ribbon and string restricting their movement and ability to feed.

Mass balloon releases are discouraged and alternatives should be used instead such as balloon popping, guessing the number of balloons, balloon relays or balloon sculptures.

Balloons given away in large numbers should be:

If you are releasing more than 5,000 balloons you must apply in writing for permission to the Civil Aviation Authority (CAA) at least 28 days in advance of the release because balloons can interfere with air traffic. Download a form from the  CAA website or call 020 7453 6599. If there is to be a release of fewer balloons than the local police or local airfield (if release is within a five-mile radius) should be informed. 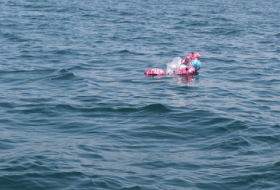 Visit the Marine Conservation Society website for more information on the problems associated with balloons and sky lanterns and alternative ideas.