In the UK plant pollinators are the insects that deliver pollen from plant to plant, enabling fertilization to take place leading to the growth of new plants. They are essential for continued plant growth in the wild.

Pollinators are essential for the maintenance of our ecosystems, through pollination of the wild plants which form the basis of most habitats. Pollinators are also important through the vital role they play in the production of many crops, contributing to the UK economy. Pollinators are of intrinsic value in their own right as part of our natural heritage, and some species, such as bees and butterflies, are widely appreciated by the public.

The Council has already considered pollinators in some areas of its work and sought to take positive action.

Why pollinators are important

Our native pollinators include bumblebees and other bees, butterflies and moths, flies, beetles and wasps. Over 1500 of species of insect in the UK are thought to carry out pollination of our native wild plants and our food crops. Without pollinators we would struggle to grow many commercial vegetable and fruit crops including apples, pears, strawberries, beans and peas, oilseed rape).

The European Honey Bee is the major pollinator available for field and outdoor crops. In Carmarthenshire there are approximately 674 apiaries made up of approximately 3774 hives. Based on average honey production per hive in 2017 of 12kg/hive this would equal honey production of approx. 45.3 tonnes (info. from regional Bee Inspector). In 2011 427 tonnes of honey was produced in Wales – worth approx. £2 million (WG website and 2017 Welsh bee Inspectors report).

Pollinators also help us in the garden and allotment, helping to provide us with the garden vegetables and flowers we enjoy. Gardens now contain more flowers than most agricultural land and, in Carmarthenshire, we have a lot of gardens. For many pollinators gardens can be a significant help to local populations.

Half the UK's remaining 24 bumblebee species are in decline – three other species have already become extinct.

Research indicates that honeybees showed a 23% decline in Wales between 1985 and 2005.

The State of Nature Report for Wales in 2016 showed that 60% of butterfly species had declined over the long term (~1970–2013). (Bumblebee Conservation Trust; Wales Action Plan for Pollinators; State of Nature Report for Wales, 2016). There are many possible reasons for these observed changes. No single factor seems to be responsible for the changes, but many factors combine to create a greater overall impact. There are, however, some impacts that are more notable than others.

Habitat loss, degradation and fragmentation – the most significant cause of decline is the loss and degradation of habitats which provide food, shelter and nesting sites for pollinators. Losses can be attributed to more intensive farming, inappropriate management of potential habitats, and urban/industrial development. A 2016 study published in Nature showed that loss of wild flowers in Britain matches the decline in pollinators.

Pesticides – there is growing evidence that the use of pesticides is having harmful effects on pollinators including honeybees, wild bees and butterflies.

Climate Change – long-term changes can deprive pollinators of food supplies at times when they need them, increase their exposure to parasites and diseases, or change habitats so that they are no longer suitable. In this way climate change is a threat to ecosystem resilience.

What do pollinators need?

Food in the form of pollen and nectar foraged from a variety of flowering plant species, available from early spring to late autumn from a number of habitats, e.g. meadows, hedgerows, verges, woodland edges, orchards and gardens. Many plants and trees can provide these food resources, including many so-called ‘weeds’ such as dandelions and daisies. In addition to flowers, many pollinators need other food resources to support their different life stages – for example butterfly and moth caterpillars need particular plants to feed on.

Diverse vegetation structure, e.g. hedgerows, scrub and tall grass for shelter, nesting and overwintering. Dense vegetation such as tussocky grassland, scrub, mature trees, and piles of wood and stone can provide essential habitat for hibernating pollinators. Many species overwinter as adults including queen bumblebees, and some butterflies and hoverflies, others as eggs, larvae or pupae. Old burrows and dense vegetation are used by bumblebees, with sunny slopes and dry ground used by ground-nesting bees such as mining bees.

How can we help?

To reverse this decline, we should aim to: 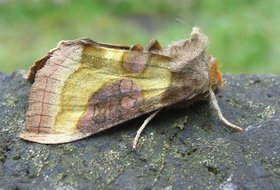 Moths are important pollinators for some types of plants 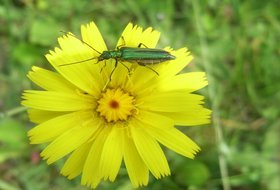 Beetles are important pollinators in the UK 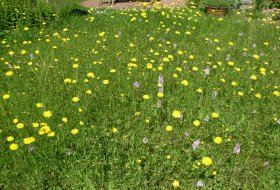 Why not try growing some plants for pollinators in your garden

Managing areas for wildlife can provide opportunities for individuals, community groups, and schools to get involved, benefiting wildlife and people. Here are some ideas.

Can your green space be better - for people and wildlife? (1023KB, pdf)